It’s starting to come together. Slowly, but surely: all the bits needed to publish my next book.

The rewrites are  progressing and the complete title for book one is finalised. The chapter titles have been wangled and reordered, with only five more to go. (-ish…)

Now is time to collect the last few bits.

Back in August 2015 I wrote a blurb – that enticing bit of prose that you read when you pick up a book…
I revisited it again today, prepared for a complete rewrite but was pleasantly surprised. It seems the narrrative has stayed true to the original vision I had when I began Tillie’s story back in 2013/4.

Since then I’ve completed the photoshoot (at the splendid Larg’s Pier Hotel) and finalised the book cover, did a film shoot for the book trailers – both the trailer teaser and the full length book trailer.

So here you are: (Almost) everything you need to know about The Department of Curiosities.

The official (full) title, Book #1: The Department of Curiosities: For the Good of the Empire

Series title: The Department of Curiosities 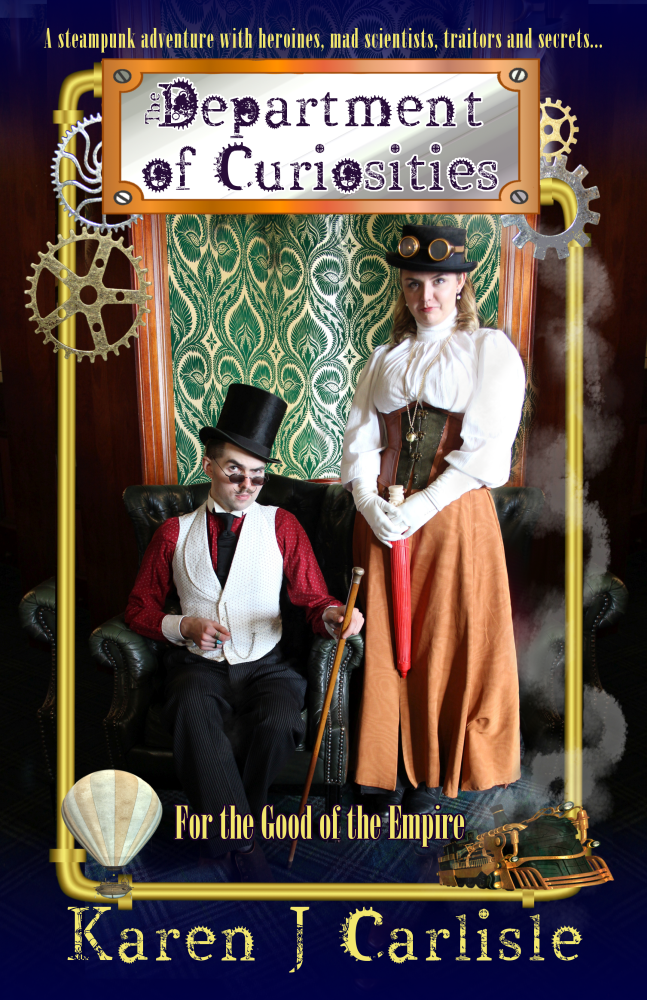 Main character/protagonist: Miss Mathilda Meriwether (Tillie).
(For a fleeting moment in 2015, she was nicknamed Tilda, but decided she preferred Tillie.)

Sidekicks/Secondary character:  Sir Avery Allington.
Sir Avery has also had a few name changes. Back in 2013, he was Henry Avery – but in 2015, Viola Stewart’s sidekick was named Henry Collins. So Sir Henry became Sir Nicholas Allington (as published in the first chapter as a bonus in the paperback copies of ‘The Illusioneer & Other Tales’). But he wasn’t happy. Sir Nicholas became Sir Avery. (I know, alliteration again – but he refused to change it one more time).

Other characters: Mr Harrow, Mr Saunders, Mr Smythe, Grace, General Sabine, oh, and Queen Victoria. They were all reasonably happy with their names. The General and the Queen are historical figures, so names were obvious. The ‘big bad/antagonist’ has several names, one being a codename he gave himself. Currently it’s: The Inventor, but may be changed to The Professor or The Engineer, depending on beta reader feedback.

Name finalised:  I have finally decided on the name of a major background character, thanks to my Patreon supporter Narrelle Harris. Prof. TK is now officially:  Professor Nathaniel Kempthorne.

Chapter names: still in flux and won’t be finalised until the final edits are finished.

Blurb: (with a little tweaking):

Book #1: The Department of Curiosities: For the Good of the Empire

Miss Mathilda Meriwether has a secret. Actually, she has several. One of them has shaped her adult life. Another now controls it.
Her Majesty Queen Victoria has control of the Empire. She is the Empire, and creator of its secrets.
Sir Avery works for The Department of Curiosities – the keepers of secrets – especially if they are useful to the Empire.
When Tillie finds herself in the employment of The Department of Curiosities, she realises this is the perfect opportunity to uncover the truth she has been searching for.
But the Queen has other plans for her.

And lastly, the social media teaser cards are ‘in progress’. You’ve already seen one: 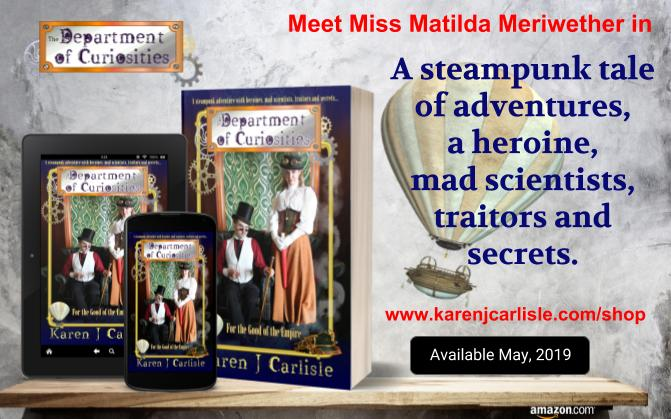 and this one’s for Supanova Adelaide and Brisbane: